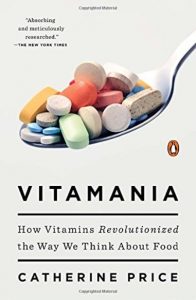 Catherine Price is an award-winning journalist whose work has been featured in publications including The Best American Science Writing, The New York Times, Popular Science, The Washington Post Magazine, The Los Angeles Times, and Slate, among others. We had the opportunity to interview her on her latest book, VITAMANIA: How Vitamins Revolutionized The Way We Think About Food. In this episode we discuss if you really need to take vitamins and supplements or can you get everything from your food? We also reveal the supplement industry’s dirty secrets and how your health can be seriously threatened by these seemingly harmless substances.

Catherine’s previous books include a parody travel guide called 101 Places Not To See Before You Die, and The Big Sur Bakery Cookbook: A Year in the Life of a Restaurant. Catherine is a two-time Société de Chimie Industrielle fellow at the Chemical Heritage Foundation and VITAMANIA was supported in part by the Alfred P. Sloan Foundation. She also has been a fellow at the Mesa Refuge, the Middlebury Program in Environmental Reporting, and the Knight Science Journalism Program at MIT (for its medical evidence and food boot camps), and has been nominated for an American Society of Magazine Editors award (for a package on back health) and a James Beard award (for a piece about eating roadkill). She’s passionate about nutrition, diabetes, health and travel, and also founded a legally themed clothing shop called Illegal Briefs. Diagnosed with Type 1 diabetes in 2001, Catherine is a frequent contributor to ASweetLife.org.