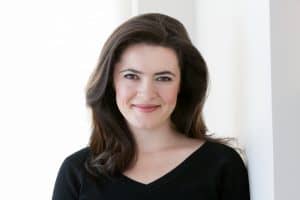 Tara Mohr is an expert on women’s leadership and well-being. She helps women play bigger in sharing their voices and bringing forward their ideas in work and in life. In this episode she shares her pioneering model for making the journey from playing small –being held back by fear and self-doubt – to playing big, taking bold action to pursue what you see as your callings. Her work has been featured on national media from the New York Times to Today Show to Harvard Business Review, and has captivated women from all walks of life including Maria Shriver, Jillian Michaels and Elizabeth Gilbert.

Tara Mohr’s work is known for its unique blend of intellectual rigor and intuitive wisdom – a blend of heart, mind and soul. She is the author of Playing Big: Practical Wisdom for Women Who Want to Speak Up, Create and Lead, published by Penguin, and named a Best Book by Apple’s iBooks. Tara is also the creator of the acclaimed Playing Big leadership program for women.

Tara’s work has been featured on The Today Show and in publications ranging from The New York Times to Harvard Business Review to goop to MariaShriver.com.

She has been a speaker at venues ranging from BlogHer to TedxWomen to Emerging Women. Her Playing Big model is now a part of leadership development programs at T-mobile, Starbucks, Bank of America, Amazon.com, and many other companies. The Playing Big model has also been incorporated into middle and high schools in the US and UK, to support girls’ leadership development.

Tara received her MBA from Stanford University and her undergraduate degree in English literature from Yale.

Over the past several years, she has grown her regular blog subscriber audience to more than 50,000 women from around the world. She is also a poet, and the author of Your Other Names: Poems for Wise Living.

She lives in San Francisco and loves dance, art, and long walks with her beloved husband and son.

Learn more about Tara and her work at taramohr.com.

Previous Post: « Intimacy and Body Image With Sex Therapist Morgan Forer, Episode 19
Next Post: Why Are Isagenix and Shakeology Always in My Facebook Feed?, Bonus Episode 2 »