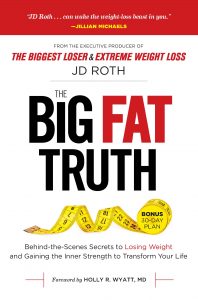 Award-winning producer JD Roth has built a television empire, creating some of the industry’s most successful and compelling entertainment programming. A reality-TV pioneer, Roth co-founded production company 3 Ball Productions in 2001, virtually inventing and championing “transformation television” – programming that celebrates the ability of people to make real changes and improve their lives.

Nowhere has this been more crystallized than in the arena of “weight loss” on TV, a genre JD first introduced to TV audiences more than a decade ago with the creation of “The Biggest Loser” on NBC – now a worldwide, half-billion dollar brand. That show became what JD affectionately refers to as a “category killer” in the TV business – a program so impactful and identifiable, it defines and ultimately owns the genre.

In practical terms, “The Biggest Loser” empowered contestants to face the truth, and then gave them the tools to dig deep and make long-lasting change. The show also inspired millions of viewers and fans around the world.

JD’s passion for transformation became the foundation of his company’s brand, reflected not just in other successful weight-loss shows including ABC’s long-running “Extreme Weight Loss” (the show airs as “Obese” in over 130 international territories) but also in series like “Bar Rescue” and “Hungry Investors” for Spike TV, “My Cat from Hell” for Animal Planet, and “LA Hair” for WE tv,  – all programming that, season after season, empowers people to want more from their lives, ultimately improving their health, businesses and relationships (JD even made geeks cool with the worldwide hit, “Beauty and the Geek,” nearly a decade ago).

JD continues producing inspiring shows that transform. Previous hits include the ground- breaking “For Love or Money” (four seasons on NBC); as well as NBC’s “Age of Love”; “I Used to be Fat” for MTV; “Flying Wild Alaska” for Discovery; “Breaking Bonaduce,” “The Pick-Up Artist” and “Scott Baio is 45 and Single” for VH1; “Unan1mous” for FOX; “Hammer Time” for A&E; “Fourth and Long” for Spike; “Groomer Has It” for Animal Planet; and the series that launched 3 Ball, “Endurance,” which ran for seven seasons on Discovery.

JD’s new book, The Big Fat Truth, goes behind the scenes of what really causes transformation and how the move more, eat less concept is one very tiny piece of a bigger puzzle in losing weight.

Previous Post: « Why Affirmations and Mantras Suck, Episode 29
Next Post: How Eating in Moderation Is Setting You Back & Linda’s Truce With Food Update, Episode 31 »